The drink of Pirates and other hardcore types

Due to excessive ignorance on subject of Grog, I've decided to make this page to educate those who have not been fortunate enough to enjoy grog.

Pirates in their plunders allow no shortage of Rum and Grog in their plunders of Riches. Among the alcoholic benefits, grog with its lemon/lime helps prevent Scurvy a common occurrence at sea. The Royal Navy's Vice-Admiral Edward Vernon (Old Grog) invented Grog on August 21, 1740 which stayed with the Royal navy until 1970.

Grog in the world of Monkey Island

This is probably the coolest form of Grog, the local pubs never seem to have the same level of sophistication as the SCUMM Bar.

These Important looking Pirates from the Secret of Monkey Island introduce you to the world of grog. In the Scumm bar grog flows like water and a side effect is the small fortune the cook has to spend replacing the mugs which it dissolves. The store on Melee Island also carries grog-o-mints which will give your breath the smell of a minty lush.

Grog contains one or more of the following:

If you drink this, please remember to leave your afterlife instructions and enough money to execute them for whomever may find your body.

As you can probably imagine, it's one of the most caustic, volatile substances known to man. You don't want to waste time drinking your Grog because it will eat through your mug and melt anything in it's path. You can also find Grog in Machines such as these.

18th Century Grog is a mixture of rum, sugar, lemon juice, and water, and it was issued to the crews of the Royal Navy. The lemon juice kept the men healthy and lowered the risk of scurvy, sugar should take the bite off the lemon juice, and the rum improved the taste and kept up the spirit of the crew, while the water weakened the alcoholic effect of the drink.

Further down the time line pretty much any diluted alcoholic beverage given to sailors acquired the name grog.

Now days it's a common reference to any sort of alcoholic beverage. (Most commonly heard in Australia)

How To Make Grog

(this is probably going to be terrible)

Acquire your favorite rum.
Add lemon and sugar until satisfied.
Dilute with Water if necessary.

My Experiment with Grog 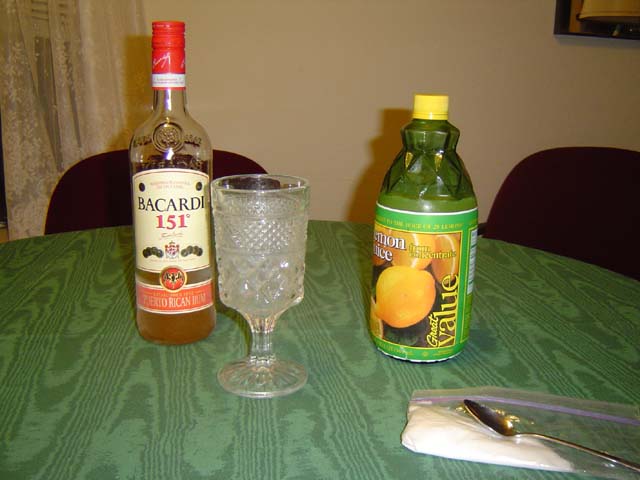 So I finally broke down and made a glass of Grog one night. Uncertain on where to start, I decided on a heavy lemon juice content. After pouring the 151, I doubled the amount of 151 with the lemon extract, added a spoon full of sugar and topped off the glass with water. Judging by the color of the drink below, you can guess that this was basically a glass of spiked lemonade. The lemon out powered the rum and the water, so I'll have to try it out again sometime.

Other people's experiments with Grog

From a Halloween Party in New York 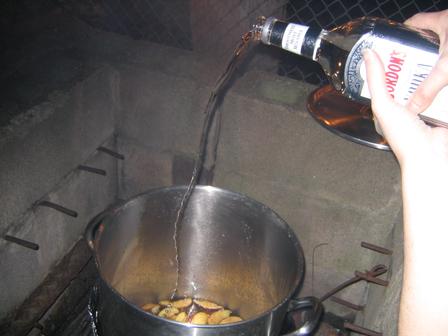 Here's how the grog ended up. At first we went very traditional: just rum, water, some lemon juice and a bit of sugar. Then we tasted it and thought it was a bit dull... Also, we wanted more VOLUME. So we added VODKA! PLus, of course, more water. And then someone got the BRILLIANT idea to go get apples, slice them up and add them to the mix! That was really the crowning touch. The grog was GREAT after that. Highly potent (alcoholic), but it tasted yummy with the apples! The fire made it smell terrific and taste sorta like a hot toddy.

Grog Conundrum - Bev Spence examines the problem of how grog was made and when it was served.
Everything About Rum - Grog's undiluted predecessor.

The Contemplator's History of Grog - A much more detailed historical account.