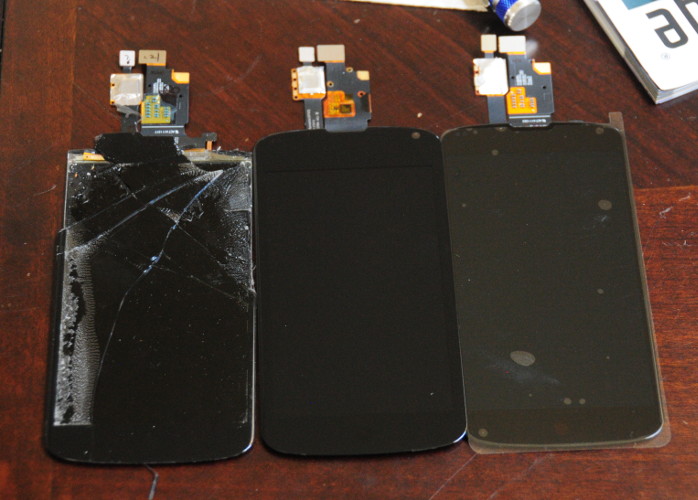 I'm somewhat shocked at the extent of the counterfeits available through amazon and ebay. All of these are substantially inferior to the original hardware. It's impressive that someone setup a mfg process to make a screen and glass to fit a smaller LCD. 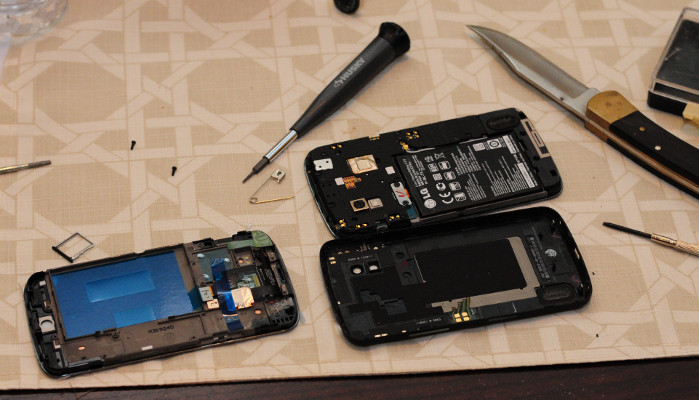 I couldn't live a week with the randomized rumors of a more expensive Nexus 5 and the old HTC Magic. Vivisection was performed and successful! 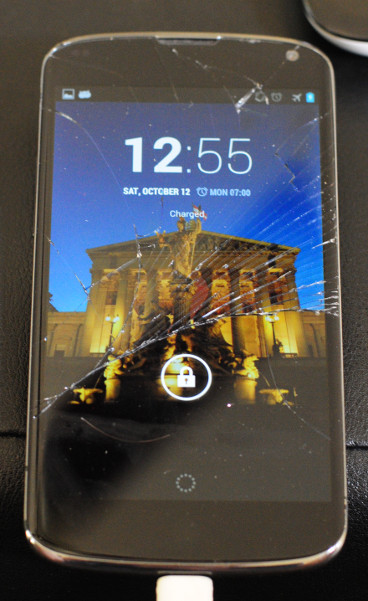 This October morning, the tile floor finally got the best of the Nexus 4. The back glass was done in by a tile floor suicide dive in Puerto Rico while the alarm was buzzing "wake up, or I'm going to jump."

If you've ever watched a N4 on a false flat surface, it will slide off, especially while vibrating. This, combined with a glass front and glass back is a recipe for success!

What to do with 3 buttons and a micro usb interface

Surprisingly lots! With debugging and adb, everything seems to function properly. Unfortunately all touch inputs must be translated by hand, like this:

Also, there is no way to change directions once this goes afoul so unlocking the phone was near impossible the normal way, even after I made a script to touch the points in order.

I'm always up for some vivisection of electronics. Unfortunately, this is not so straightforward here. Through some manufacturing process, the digitizer for the touchscreen is glued to the glass. Therefore, if the glass breaks, no more touchscreen input. There have been a few lucky chaps where the phone breaks at the bottom and they only lose the back buttons but this is not my situation. The most straightforward method appears to be buying the LCD, digitizer and glass all in one go.

Current prices for the 8GB N4 are $199 but out of stock at Google play. Why is new hardware almost as cheap as replacement parts!

Nexus 5 Rumors, October 14-15 announcement. Expecting $299 new price. It looks like I won't have a nice phone for a few weeks after cutting the myTouch 3g's defunct sim card into a holder. This thing feels tiny now and has survived many more drops ( mostly tarmac ).

What to do with it

I'm thinking it could do with some raspberry pi style ingenuity, if I can can get something more useful than android running...

I think the biggest challenge here is no functional touchscreen, where everything is designed to use this. If we can get around this, using shakes, volume + power buttons, voice, ssh, and adb the phone should be completely useful.

History with the N4

This phone is fantastic. Priced to sell, unlocked, excellent screen, feels slick, and is still faster than all of the computers in my house. With the lower price before the N5 comes out, I'm tempted to buy it again in spite of all of the glass woes. Changing to a prepaid plan, the monthly savings paid for it in 8 months. When I got it, I almost instantly stopped hating using my phone again! My only complaints are that it's slightly too big and made of glass.